Colombia´s capital Bogotá is a rapidly growing metropolis: While the population was 6.4 million at the turn of the century, this number increased to 9 million until today and is expected to continue to grow to 11.4 million living in the greater metropolitan area until 2035.

This dynamic population growth is reflected in the real estate market, where the demand for housing space has been increasing in the last couple of years. Especially the need for housing for the urban population has grown which among other reasons is attributed to the high GDP, with an interest of debt of 12% on a rising trend. About a quarter of the Colombian GDP is being generated in the city of Bogotá which means that its economic power is higher than that of the countries Ecuador, Panama or Costa Rica.

Bogotá is also a very attractive city for young people, as the sixth biggest, partly widely renowned, Universities have a combined number of 80.000 students. These universities are all located around the colonial historic center in the middle of downtown Bogotá.

The market reacts to the increased demands. While the market for commercial spaces already is largely saturated, the high demand in the residential sector triggered the start of various housing projects in the center. Besides the completion of the so far highest building, the Torre Batacá BD with 57 floors and a height of 240 m, other residential towers are being developed in its direct proximity.

The from the market so far undiscovered hillside locations on the outskirts of the historic old town, are characterized by non-landmarked buildings and fallow land. Here student life and business activities are taking place in a hip and urban setting next to popular restaurants and bars and the most important museums.

There we will not develop residential towers but rather architecturally attractive objects with up to six floors with breathtaking views of the city and within walking distance to universities, the governmental and financial center, and the most important cultural areas of the city.

This is where the so far unsaturated investment opportunities for German investors come to life:

= fair investments with high returns, on a long-term basis and in fantastic locations. 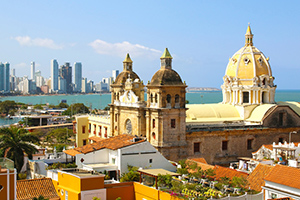