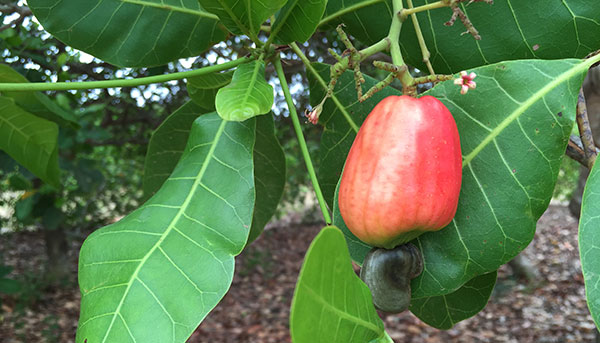 Cashew is a versatile product with many possible uses:

The cashew nut has long been considered a superfood, next to quinoa, goji berries and co. It is a nutritious product rich of protein, essential minerals and vitamins as well as unsaturated fats. The cashew nut is often eaten as snack as part of nut mixtures or also used for many Asian dishes. It is used as topping of salads and in muesli/cereal it is also processed to cashew puree.

The cashew apple contains five times more vitamin C than oranges. It is used to produce Juices, Schnapps and Wine. The Cashew-apple juice is often applied in the naturopathy where it is used as highly concentrated cough-syrup. You can also find it as dried fruit for example in mueslis.

The phenol containing liquid, that is located between the nutshell and the nut, is used in the industrial production of brake pads as well as laminates, rubber, lubricants and paints.

The shell is further processed to natural fertilizers or combustibles

The branches that come off during tree maintenance will either be processed to organic bio fertilizer or used as combustible. The wood of the tree trunk will be sold as timber or firewood, once the tree loses its fruitfulness (approximately 30 years after plantation).

The native cashew-species “Anacardium Occidentale L.” is originally from the Amazonas territory and grows in the wild of the Llanos Orientals, meaning it is adjusted to the local climate conditions.

The Cashew-tree is one of the most robust in the world. Its deep far-reaching roots make it a very storm and drought-resistant tree. In addition, it only needs few nutrients to grow which matches perfectly with the sandy and acidic soil of the Llanos Orientales.

The cashew tree produces its fruits from the 3rd year onwards and it reaches its final height and production capacity in the 12th year. A cashew tree can be productive for up to 30 years, given it undergoes monitoring and good tree care.

Cashew nuts are in comparison to other nut kernels considered a high-quality food product. The demand has continuously increased over the last few years in the main markets (USA, India, EU) as well as in smaller markets as such Australia and China.

Several new Cashew-products such as cashew nut-oil, cashew puree as well as cashew milk are introduced to the market.

Cashew nuts stand out because of their low-fat content as well as low calorie count per portion and thus counts to nuts which – if consumed moderately – contribute to maintaining a healthy cholesterol and blood sugar level and to counteract the risk of a heart attack.